The amphibious dock landing ships Wuzhishan (Hull 987), Kunlunshan (Hull 998) and Changbaishan (Hull 989) attached to a landing ship flotilla with the navy under the PLA Southern Theater Command steam alongside in waters of the South China Sea during a maritime training exercise on November 18, 2020 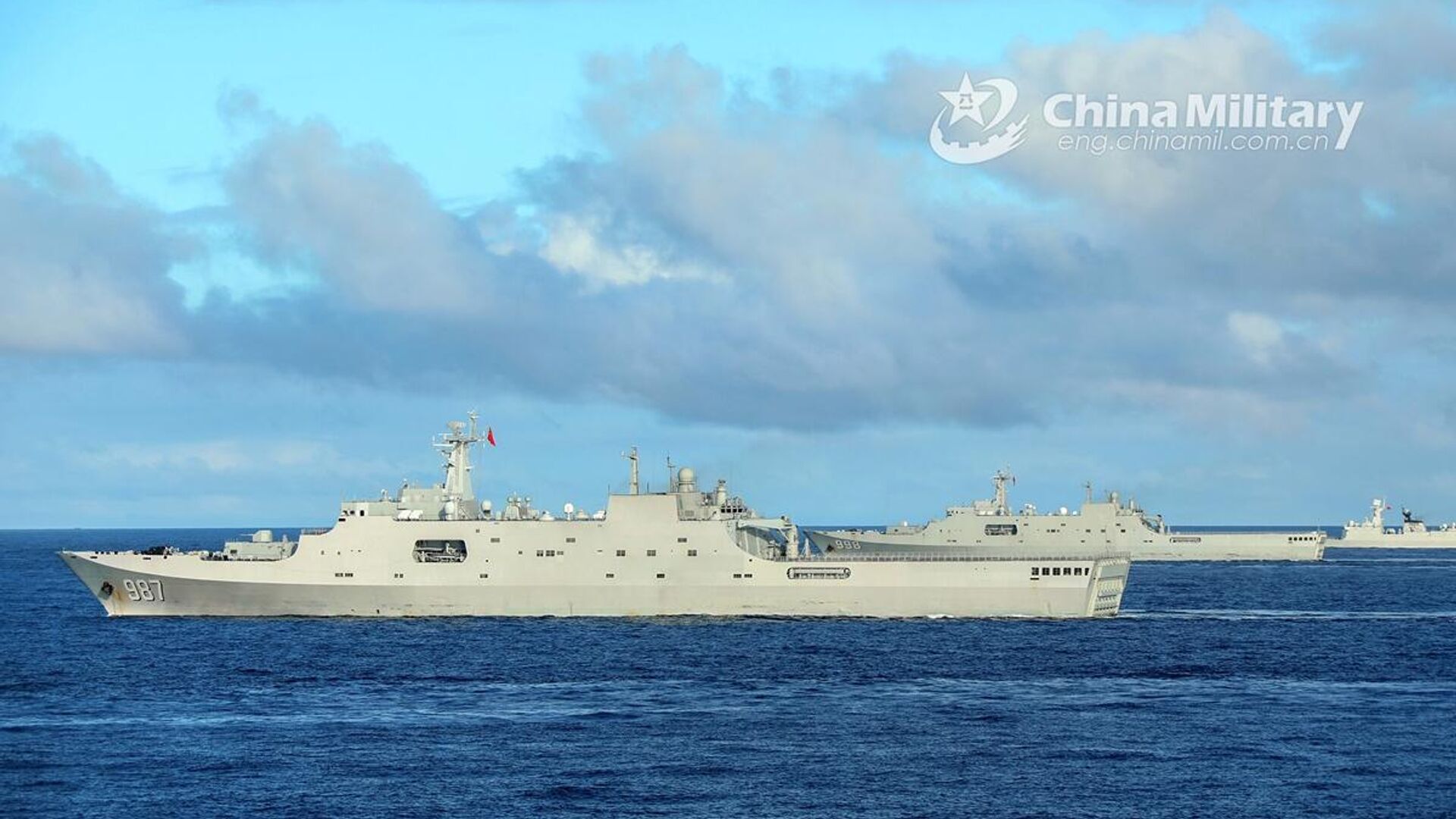 A top US military commander on Sunday again hyped the so-called militarization by China in the South China Sea by personally participating in an aerial close-in reconnaissance on Chinese islands and reefs in the region together with journalists. Chinese analysts described the move as a political farce attempting to copy the Ukraine crisis in the Asia-Pacific, rallying allies, partners and other countries in the region to confront China.US Indo-Pacific Commander Admiral John C. Aquilino claimed on Sunday that China has “fully militarized” at least three of several islands it built in the South China Sea by arming them with anti-ship and anti-aircraft missile systems, laser and jamming equipment, and fighter jets, “in an increasingly aggressive move that threatens all nations operating nearby”, AP reported on Monday.

Aquilino made the remarks on board a US Navy P-8A reconnaissance aircraft that flew near the Nansha Islands, including the Meiji, Zhubi and Yongshu reefs, and the aircraft was repeatedly warned by Chinese callers that it illegally entered Chinese territory and should move away, AP reported.

While claiming that the US’ main objective in the region is “to prevent war” through deterrence and promote peace and stability, Aquilino said that the US is prepared to fight and win “should deterrence fail,” with AP noting that Aquilino leads the largest US command with 380,000 military and civilian personnel covering 36 nations and territories.

The Nansha Islands and adjacent waters are Chinese territories and China has sovereignty over them. It is China’s rights to construct necessary facilities on its own territory to safeguard sovereignty and territorial integrity, just like any other country does, Ding Duo, deputy director of the Research Center for Oceans Law and Policy at China’s National Institute for South China Sea Studies, told the Global Times on Monday.

"It is not reasonable that the US disallows China to deploy defensive military facilities on its own territory, while at the same time the US sends warships and warplanes to China's doorsteps in the South China Sea on a daily basis," Ding said.

In 2021, US large spy planes carried out about 1,200 aerial close-in reconnaissance sorties on China, with some of them coming near 20 nautical miles of the Chinese mainland’s territorial baseline. US aircraft carrier strike groups and amphibious ready groups entered the South China Sea 13 times, more than doubling the activities of 2020, and at least 11 US nuclear-powered attack submarines were spotted in or near the South China Sea, including the Seawolf-class USS Connecticut, which had an accident in the region, according to monitoring from the South China Sea Strategic Situation Probing Initiative, a Beijing-based think tank.

US warships also repeatedly trespassed into China’s territorial waters in the South China Sea, leading to countermeasures by the Chinese People’s Liberation Army (PLA) to warn them away.

Fu Qianshao, a Chinese military expert, told the Global Times on Monday that these provocative US activities could gather intelligence on the PLA, while also prepare the US for a potential military conflict with China.

It is necessary for China to make proper constructions to safeguard national sovereignty, security and territorial integrity, and the US has no right to make irresponsible remarks on this, Fu said, noting that the US has made Guam the world’s largest island military base, and also built many military bases in countries like Japan and South Korea.

The US is using rouge logic and applying double standards, which make no sense, analysts said.

Despite the ongoing Ukraine crisis, the US is still hyping the situation in the South China Sea, which is a reflection that the US has set its eye firmly in the Indo-Pacific region, Ding said.

In addition to the increasing US military activities in the South China Sea, including drills, reconnaissance operations and military exchanges with countries in the region, the US may also attempt to stir up trouble in the international public opinion and diplomatic fields, Ding warned.

It could be just like what the US has done with Ukraine, as it could seek a proxy in the region to lead from the front in confronting China, with others following, Ding predicted.

By flying personally to the South China Sea with journalists, Aquilino is staging a political farce to win attention and again build up tensions in the region after the world has shifted its eyes to Europe, another Chinese military expert who requested anonymity told the Global Times on Monday.

China must pay high attention to the situation, and must not allow the US to copy the Ukraine crisis in the South China Sea, Fu said, noting that the situation in the region, despite its complexity, has been relatively stable recently.*This article was originally published by The Global Times.