/ Go to the photo bankResidents leave the city of Mariupol, Donetsk People’s Republic. 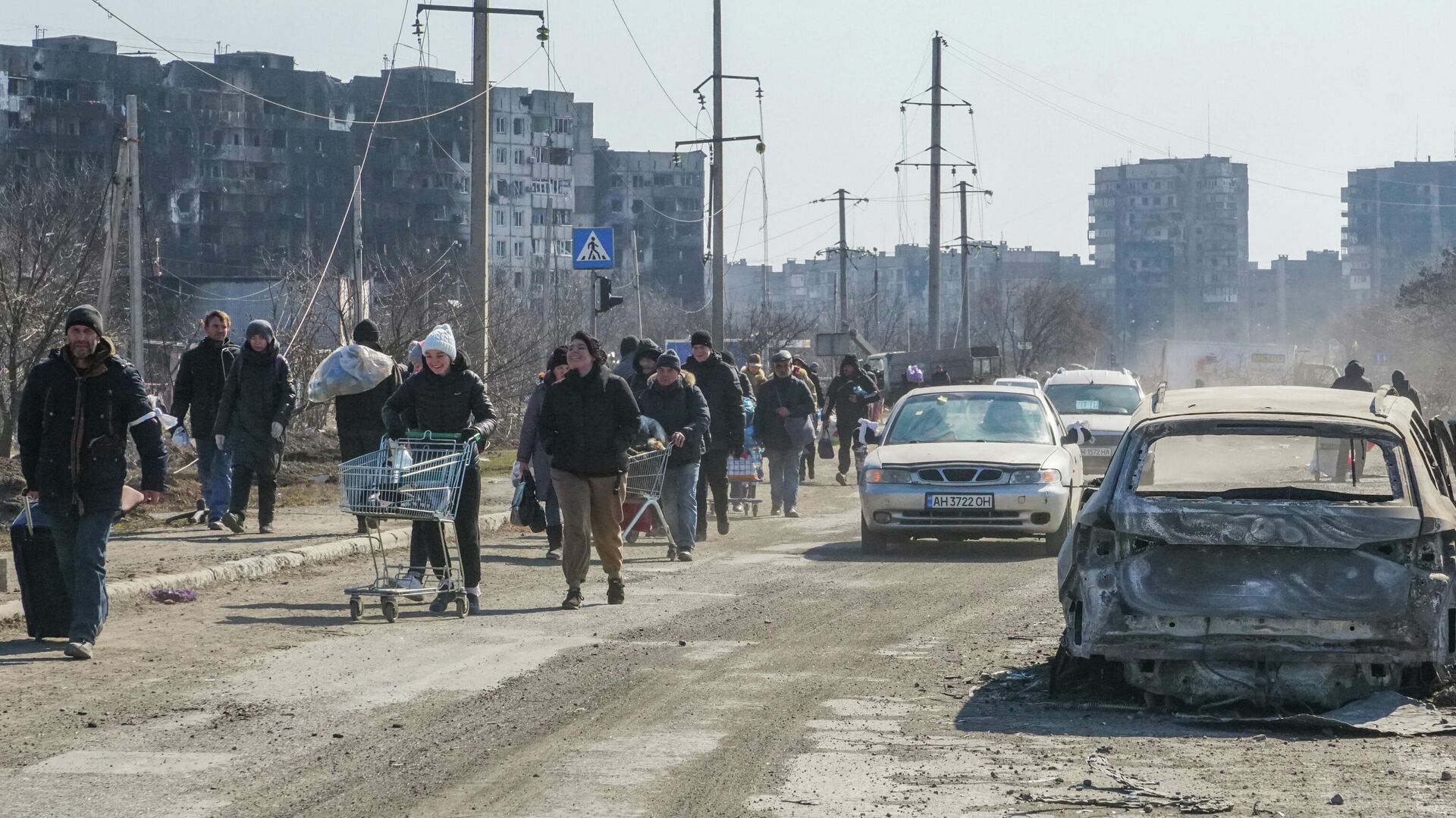 CorrespondentWASHINGTON (Sputnik) – The Russian Embassy in the United States said allegations in Western media about the creation of “filtration camps” in Mariupol were unprofessional and false.Earlier, The Washington Post, The Guardian and other media outlets claimed that Mariupol residents were being “deported” to Russia after having been taken to “filtration camps.” The reports were refuted by authorities within the Donetsk People’s Republic.

“We have noted statements by the Ukrainian authorities circulated in US media about the alleged creation of 'filtration camps' by our military on the territory of Mariupol. Unprofessionalism and lies cross all boundaries. The press operates in line with the principle 'all means are good in the information war',” the embassy said in a Telegram post.

The embassy said the allegations were instead referring to inspection points that are intended to be used for civilians leaving the area of active hostilities.The Russian mission also emphasized that the military had set up checkpoints for civilians leaving the zone of active hostilities and added that the Russian military seeks to “carefully inspect vehicles heading to safe areas” as a means of avoiding sabotage operations by Ukrainian national battalions.

"We will detain all bandits and fascists. The Russian military does not create any barriers for the civilian population, but helps to stay alive, provides them with food and medicine," the embassy posted to Telegram.

According to Russian diplomats, media reporting should focus on crimes by the Ukrainian military, “which use their own citizens as a ‘human shield’ and place heavy weapons in the residential areas of Mariupol.”

"The Nazis did the same in besieged Berlin in 1945," the post added.

Also on Monday, Colonel-General Mikhail Mizintsev, head of the Russian National Defense Control Center, announced that members of neo-Nazi militias who committed mass atrocities in Mariupol will be found and would be punished.Mizintsev referred to the many statements of innocent civilians who fled the city, telling of how members of the Ukrainian nationalist voluntary battalions stand behind their fellow civilians while they fire their weapons at the Russian and Donbass soldiers. Mizintsev added that “all [testimony] will be investigated in detail.”

Situation in UkraineVideo: Mariupol Resident Says Azov Regiment Neo-Nazis Destroyed City Pool, ‘Killed a Lot of People’20 March, 14:20 GMTMizintsev continued that Kiev had ordered those national battalions to leave Mariupol in small groups under the guise of civilians, after Ukraine refused the offer to conduct a humanitarian operation in the city, declaring that it would never surrender to the Russian army.Russia launched a special military operation on February 24 in Ukraine as a response to pleas for protection from soldiers of the Donetsk and Lugansk people’s republics. The special military operation, which is only targeting Ukrainian military infrastructure and not civilians, aims to “demilitarize and denazify” Ukraine, according to statements released by the Russian Defense Ministry. Moscow has consistently noted that it has no intention of occupying Ukraine.Let’s stay in touch no matter what! Follow our Telegram channel to get all the latest news: https://t.me/sputniknewsus