A man prepares to fill fuel in a vehicle at a petrol pump in Gauhati, India, Sunday, Sept. 22, 2019. Fuel prices have increased in the last six days following attacks on key oil facilities in Saudi Arabia.

Rahul Trivedi India, the world’s third-biggest oil importer and consumer, imports around 85 percent of its oil needs. The country’s fuel prices are dependent on international prices, which, in turn, are driven by crude prices. The benchmark Brent crude oil prices have risen sharply to nearly $120 per barrel from approximately $65 a barrel six months ago.Fuel prices rose by more than 80 paise per litre on Tuesday in India after a gap of roughly four months (137 days), spurring netizens to take to social media to vent their exasperation about the rate of inflation.In Delhi, the price of petrol is INR 96.21 ($1.26) per litre and that of diesel is INR 87.47 ($1.15) per litre.Before the hike, a litre of petrol cost INR 95.41 ($1.25) and diesel was INR 86.67 ($1.13) per litre.The rise was also felt in other big cities.Petrol and diesel price in the country’s financial capital Mumbai rose respectively to a staggering INR 110.82 ($1.45) per litre and INR 95 ($1.24) per litre.In Kolkata, petrol and diesel cost INR 105.51 ($1.38) and INR 90.62 ($1.18), the prices in Chennai were INR 102.16 ($1.34) and INR 92.19 ($1.21) on Tuesday.Fuel prices in India vary from state to state, depending on local taxes such as value added tax (VAT) and freight charges.The price of domestic cooking gas (LPG) also rose by INR 50 ($0.66) per cylinder in line with a spike in international energy prices. A 14.2kg non-subsidised LPG cylinder will now costs INR 949.50 ($12.43) in the national capital (Delhi).On Monday, the price of diesel sold to bulk users rose by about INR 25 ($0.33) per litre in line with a near 40 percent rise in international oil prices.Netizens reacted sharply to the price rises, as it is likely to have a knock-on effect on the cost of other various daily necessities.A social media user described the price hike as “extortion”. He tweeted in Hindi: “As the state elections ended, government adopted a policy of extortion. Congratulations to the people of the country for the first gift after the polls. Petrol and diesel price hiked by 80 paise per litre.”© Photo : Twitter/@MohdAasifSTPTwitter User Reacts Sharply on Increase in Fuel Prices in India

Twitter User Reacts Sharply on Increase in Fuel Prices in IndiaMaking a jibe at the BJP’s recent electoral win in four states, another user said in Hindi: “Celebrating the success achieved in four states, diesel price hiked by 76 to 86 paise and petrol by 76 to 84 paise per liter and domestic LPG cylinders become more expensive by INR 50 from today.”© Photo : Twitter/@TrilokHA Twitter User Takes Jibe at Modi Government for Increase in Fuel Prices

A Twitter User Takes Jibe at Modi Government for Increase in Fuel PricesAnother social media user said in Hindi: “A gift from Modi on the occasion of Rangpanchami. Prices of domestic LPG cylinders increased by INR 50 and diesel and petrol prices are also raised. So the blind followers of Modi can clap now.”© Photo : Twitter/@KParmarINC33Netizens Slams Modi Government for Increase in Fuel Prices

Netizens Slams Modi Government for Increase in Fuel PricesAnother user linked the price hike to elections, saying: “With the end of the elections, the prices of petrol and diesel have started to increase. Petrol and diesel price hiked by 80 paise. Now the Bharatiya Janata Party will pay off the debt of every vote by increasing the fuel price every day…!”© Photo : Twitter/@rohitsinghjoonOne User Linked Fuel Price Hike to State Assembly Polls One User Said Fuel Prices will be Out of Reach of Common PeopleHowever, a section of people also lent their support to Narendra Modi’s government despite the price hike. One such social media user said that this had to be done because of the rise in international crude oil prices.© Photo : Twitter/@PSoniaBeingSome Users Justified Fuel Price Hike and Supported Federal Government 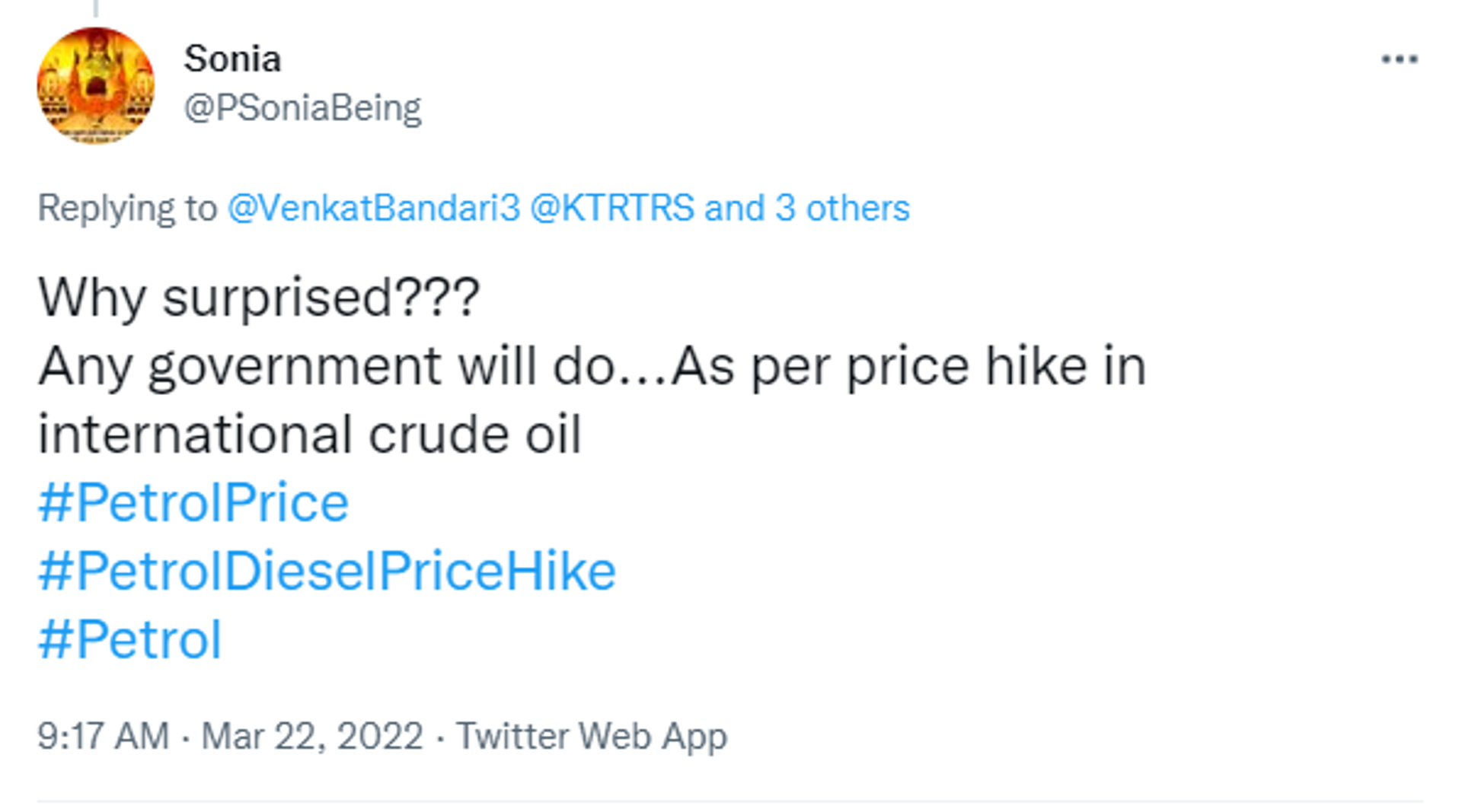 Some Users Justified Fuel Price Hike and Supported Federal GovernmentFuel prices in India have been stable since 4 November 2021. The Prime Minister Narendra Modi-led government had then slashed the excise duty on petrol by INR 5 per litre and on diesel by INR 10 per litre to bring down the rates from record levels.In November last year, some states also slashed taxes to cap fuel prices which were soaring above INR 100 ($1.31) per litre mark.